Are You Ready for Week 2’s Summer Short & Sweets Challenge?

Welcome back to the 2nd installment of Summer Short & Sweets.

Before I reveal what I’ve written, I need to clarify that I wasn’t late last week. Susanna Leonard Hill said as long as the entry is posted on her blog before next week’s round is announced we’re good to go. What a relief. I’m now three days late, but that’s only if you go by last week’s rules. 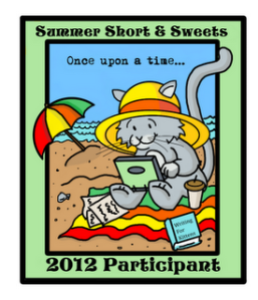 If you’re up to participating, here are Susanna’s rules and regulations for Week 2. No, Susanna isn’t a drill sergeant, but if you don’t follow the rules you’re cheating.

“Today’s Short & Sweet will work best if you don’t peek. I’m not sure quite how to accomplish that on a blog post, so let’s go on the honor system – no scrolling down yet!

Now pick a number from 1-10 again and write that down.

Now do it again.

And now, one last time.

It’s okay if you pick the same number more than once.”

“Use your first number to select from this list:

Use your second number to select from this list:

Use your third number to select from this list:

And use your last number to select from this list:

You should now have a randomly selected character, setting, time, and situation/challenge – everything you need to prompt a story!

List the 4 you got and write 50-100 words of whatever story they suggest to you! Don’t agonize! Don’t over-think! We’re all among friends. Just write! All we’re doing here is priming the pump. If all you can squeeze out are 50 rusty words, that’s fine! You wrote 50 words in the middle of your hectic, busy day! But maybe, just maybe, 25-50 more will trickle out a little less rusty, and maybe after you’ve written your 50-100 here you’ll find you’ve got a gush of clear water rushing forth and a whole new story will well up and land on your list of accomplishments for today!

Oh, and if you find it’s too hard to include all 4, it’s okay to just use 1, 2, or 3 of the prompts you picked – the exercise is just to get ideas and words flowing.”

Character #7 – A monster who is afraid of thunderstorms

Time #5 – sitting down to breakfast

Situation/Challenge #1 – something embarrassing has just happened

A sonic shock wave cracked and a lightning bolt lit up the sky the way fireworks exploded on July 1st.

Morley’s fur stood at attention like toy soldiers. Rain pelted his fur. He pounded the gravel. Cowering beneath the plank that led to the slide, the wood creaked. I should run home. His paws turned to lead.

He fished a peanut butter and jelly clump out of his shirt pocket. Maybe mom’s breakfast would help. He’d scooped his toast off the kitchen table and lumbered out the door. He didn’t have time to sit down for breakfast because he hoped his girlfriend might be at the playground.

He stuffed the gooey morsel into his mouth and chewed. Thunder rumbled. He shivered. A tear leaked and dribbled down his cheek. Samantha didn’t even know she was his girlfriend and mom’s breakfast didn’t calm him one bit.

“Boo!” Fuzzy, purple braids tied with silk ribbons dangled over the side.

He gulped. “Samantha?” Heat flushed his cheeks. Certain he was redder than his raspberry jelly, he pinched his arm. Why did I let my voice crack louder than thunder?

She’s asking me to dance? Morley wasn’t about to let a thunderstorm ruin his chance at happiness. His chest puffed out. He gripped the plank and swung his legs up. Leaping to his musty feet, the board bounced. Samantha teetered like the see-saw. He grabbed her warm paw. She giggled.

“Ready to dance?” he asked.

She offered a nod. He twirled her faster than the merry-go-around.

Morley chuckled. The rain tapered off.

“He who has hope, has everything.”

If you’ve read this far down the page, I hope you enjoyed this post. If so, please leave a comment and/or enter your email address after clicking the “Sign Me Up!” button. You’ll receive free updates every time I post.

Tracy is missing in action.

If she ever shows up, she’ll blog about topics that will appeal to coloring enthusiasts, pet lovers, children, parents, and grandparents. That just about covers everyone.

P.S. My mum (Tracy) tells me I’m doing a fine job filling in for her.

Calm Coloring: Faith, Hope & Love
(Art & Soul Therapy for Kids-At-Heart) will help those aged 9 to 99 walk by faith, soar on wings of hope, and blossom with sunshiny love.

Order 3 or more paperback books and receive FREE shipping too.

To get Tracy's new posts straight to your inbox, just pop your email address in the box below, and hit subscribe. Please be assured your email address will never be shared or sold. Read the Privacy Policy page for further details.